I have been interested in Benjamin Franklin for about a decade, since first hearing stories about his adventures in early self-education in the books of celebrated teacher John Taylor Gatto. Gatto holds Ben Franklin up as an exemplar of the notion that, in the modern age, we chronically underestimate how capable children and young people are of engaging in self-directed study and learning through work and entrepreneurship.

Gatto refers to Franklin's Autobiography as a great place to start if you're looking for suggestions on how to thrive as an autodidact, and I agree.

Franklin's biography is also famous among the business set for a different reason: the detailed explanation of Franklin's ideal daily schedule.

Here's the basic rundown of how Franklin liked to organize his day: 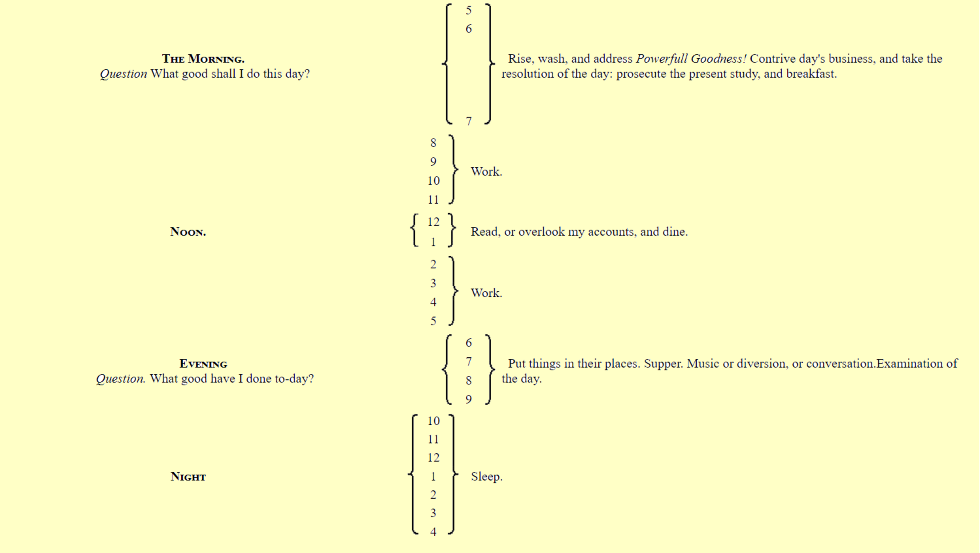 There are a ton of articles about this schedule, and about modern folks taking a crack at living by it for a week, a month, or more, so I won't go over it in too much detail here. Google 'Franklin schedule' and you can't miss.

What truly interests me here, however, is a particular morning activity that Franklin considered immportant enough to pursue every day.

If you look in the morning block, you'll notice that Franklin performed the typical necessaries, such as washing up and eating breakfast, and would also review the business that laid ahead that day, spend a bit of time praying or perhaps meditating (that's what "address Powerfull Goodness" means), and work on learning something new.

If that sounds like a busy enough morning already, it certainly is - and Franklin was the first to admit that this schedule was a target that he aimed for, not an ironclad agenda that he adhered to slavishly. Indeed, as he was a small businessman, to say nothing of his other public obligations, he had to be adaptable as different circumstances arose during the day.

But there is one item in his morning list that I consider important enough to earn the status of non-negotiable in my own daily routine.

The Virtue of Resolution

If you hadn't caught it yet by process of elimination (or the title of this post), I'm referring to this phrase: "take the resolution of the day."

You might just read that phrase as an "old-timey" way of saying that he would figure out what he was committed to working on that day. I prefer to read it in the context of another snippet of his writings, however.

In another part of the Autobiography, Franklin lists out the Thirteen Virtues he has selected as his own moral guidepost. You can read them all at thirteenvirtues.com.

Franklin was so serious about trying to cultivate these virtues within himself that he kept a small notebook with a grid consisting of each virtue in the left column, and each day of the week running across the top, and would mark a small dot in the relevant grid cell when he fell short of any one of them during the course of his day's business.

Here's how Franklin described the virtue he called Resolution: "Resolve to perform what you ought; perform without fail what you resolve."

On first reading, this may sound like just a folksy aphorism, but I think there's a bit more there.

The second direction is clear enough, and is what people tend to focus on when reading this quote, but it's a good reminder nevertheless: "perform without fail what you resolve," that is, follow through on what you decide to do, and don't let anything get in your way.

The first part of the quote is where the real meat is: "resolve to perform what you ought." Are you sure you've thought about the best way to spend your time today - the 16 or so waking hours alotted to you, or as Tim Urban once referred to them, the "100 blocks" of time you've got before it's time to go to sleep again? What you "ought" to do is wrapped up in many other, deeper questions.

What is your concept of "the good life?" If Franklin's Thirteen Virtues don't do it for you, what are the behaviors you could cultivate in yourself that would make you a better person? Is your to-do list addressing any of those behaviors? Or are you just expecting the important stuff to come together on its own? What are your obligations? Are those your real obligations, or just the things you've allowed to take over your life?

The heaviness of that phrase - "resolve to do what you ought" - is necessary to give the second phrase - "perform without fail that which you resolve" - any meaning at all. If you're not tuned into what's important, being busy and checking items off your to-do list won't matter. You'll never even have time to get to most of it unless you've been ruthlessly honest with yourself about what you ought to be doing right now.

That's why every morning, I remind myself, like Franklin did, to take the resolution of the day. Do the goals I've set for myself matter? If so, have I given myself the time, resources, and permission to achieve them without fail?

Your life is too important to let even a single day go by without being able to answer "yes" to these questions. Like Franklin said, we may fall short from time to time, but we'll be better for the effort.